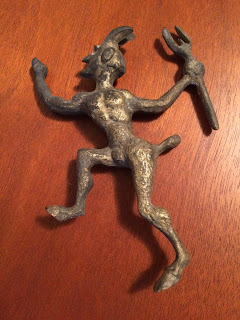 Some time after my parents passed away, my family gathered at my parents' home, our childhood home, to divvy up their belongings. When we were finished with the more obvious items, we combed the house for anything else one of us might want. Searching a drawer in the basement, I came across the little guy in the picture. We were all surprised; no one remembered seeing him while we were growing up. Later, a little online searching would reveal that this bronze figure is a devil or satyr fireplace damper pull--it would dangle over the fire on a chain from the damper and glow red as it heated. But at the moment we saw him, no one had any idea what he was.

When I was little, the basement was a spooky place, especially in the dark--I couldn't run up the stairs fast enough. Sometimes I'd have nightmares about little demonic beings coming up from the basement. As I grew, my dream demons were replaced by an invisible, disembodied but menacing evil presence. When I married and started a family, I no longer felt personally endangered by the demonic presence, but I'd have nightmares in which it threatened my wife and children.

I had my first lucid dream when I was about 14, and from then on, I had spontaneous lucid dreams once or twice a month. I enjoyed becoming aware in my dreams. Lucid dreams were always vivid, feeling almost more real than waking life, and sometimes, I had amazing experiences. When I was in my 50s, one night I dreamed I was in an brightly lit white attic. Suddenly, I felt the invisible evil presence gather at the opposite end of the room. This time, the presence triggered lucidity. Realizing this was a dream and nothing bad could happen to me, I decided to accept whatever would happen.

As I stood there, the presence coalesced into the form of a teenage boy, someone I'd known, a pariah, not one of the cool kids. I remained present with my sense of dread, and I consciously relaxed. He walked across the room, stood in front of me, and reached out and hugged me. As he dissolved into me, the sense of evil dissipated, and I felt almost overwhelming compassion and acceptance.

As time passed, I could tell that the dream had changed my relationship with the demonic presence. I still would dream of it occasionally, but now, it felt lonely, eager to be accepted, as if it were a puppy. I wasn't afraid of it anymore, but instead, I felt affection for it. I sensed that it had been trying to protect me, probably from very intense subconscious material. In another dream, I went down to the basement again and felt the presence. But the dark, frightening basement of my boyhood had changed into a walk-out basement, with windows and a door to the outside, filled with light. The wall opposite the exterior was lined with filing cabinet drawers. I opened one, and I knew that all the material in every cabinet was now available to me.

So, years later, when I opened the drawer in my parents' basement and came across the damper devil, I felt an immediate sense of recognition. I asked if anyone else wanted him, and when no one spoke up, he was mine. Back home, I cleaned him up a bit and placed him on the bottom shelf of my meditation altar. I feel a deep, compassionate connection with him. He's a tangible reminder of the path we're all on, the journey to recover the parts of ourselves that we've lost.